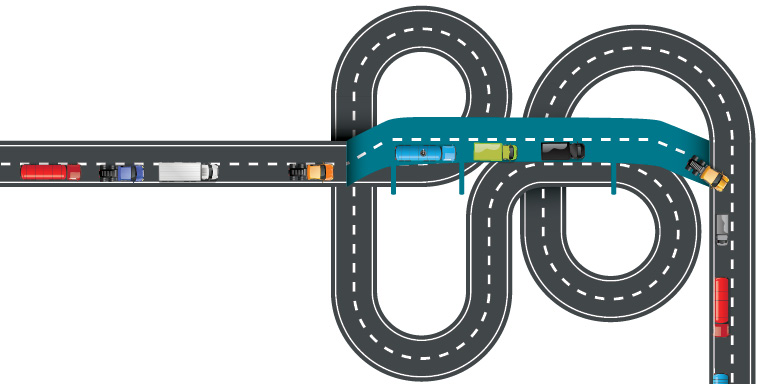 CDL testing is set to receive its first updates in about two decades. What is behind these changes and how will they impact the industry?

I will never forget the day when my leadership and I were approached by AAMVA and the Test Maintenance Subcommittee about modernizing the skill sets for CDL tests. The current CDL testing system was conceptualized in the late 1980s as a result of the Commercial Motor Vehicle Safety Act of 1986. The first concept was produced and implemented in the 1990s and the first AAMVA skill testing models were introduced in 2005. So, it’s been a while, and with the advances in commercial motor vehicle technologies and adding what we’ve learned from crash causation factors over the years, it was time to modernize the system.

The system needs to be flexible enough to leverage the current technologies. We have to incorporate new industry practices—for example, we are currently doing some maneuvers during the basic controls skills test that aren’t even used today. We also wanted to look at our state partner needs. We really needed to take a step back and look at what’s currently being done so we can move this model to the future. To make that happen, FMCSA funded this modernization project through the CDL program implementation grant program, and it’s been a collective collaboration between the federal government, state governments, industry, AAMVA and the Test Maintenance Subcommittee.

There are three segments to the CDL test: the vehicle inspection segment, the basic controls skills and the road test. At this time, the road test is not changing. For the vehicle inspection segment, applicants can expect a test that better aligns the procedures they follow today with the procedures they’re being tested on. What applicants will be tested on in this segment will be the same pre-trip and post-trip inspection skills that they use in real life on the road.

And for the basic controls skills segment, there will be a smaller footprint. So, because the testing maneuvers are smaller, facilities will be able to use less real estate for testing and that is a great thing for testing sites. The maneuvers are mostly staying the same so we’re still testing drivers on those skills they will be using daily.

We’re currently working on the final product regarding these improvements, and from there we will introduce it to states. Since the new test model will still meet all existing regulator requirements, we don’t foresee a need to change any regulations or go through rulemaking.

As far as the future of CDL testing beyond these changes, I think we have to look at technology and make sure we are leveraging it correctly. Our experience during the COVID-19 emergencies showed that it’s possible to use technology to improve efficiency. It put a halt to a lot of things but there were jurisdictions that could still test because of technology—for example, using cameras to observe tests rather than having the examiner ride in the vehicle. We also can’t forget about how the progression of autonomous vehicles will impact CDL drivers. It will be exciting to see where things go, and I think what I’ve described here are the two issues that will be most important looking forward: being prepared for the next emergency and leveraging emergent technologies.

From our perspective, CDL testing modernization is a process that has been going on since at least 2014 when we went to a longer test for the hands-on pre-trip inspection. That test went from one to two hours, and while it ensured drivers are safer and more qualified, it also doubled the amount of time it takes to do a test and produced a large backlog of tests. When you add that to the driver shortage, it can be an issue.

For example, in Houston we have a lot of people working construction or at chemical plants or jobs like that, and if they’re laid off, they may look to getting their truck driver’s license. However, if the testing process ends up taking three or four months, what happens if they get called back to work in that timeframe? They’re going to go back to work. So, I think we need to look at modernization from that perspective of making it more advantageous for a person wanting to go back to work.

During the pandemic, the waivers made by the Federal Motor Carrier Safety Administration to allow more driving schools to administer the written test was a step in the right direction. That allowed us to operate when we probably would not have been able to train as many people because of the lack of spots and available appointments for written tests at other locations. We were able to administer those tests ourselves and keep things rolling.

It allowed us to be that “one-stop shop” where we can schedule the different tests and be in control of the timing. This is very beneficial to the potential new drivers as well as to us as the driving school. When you can schedule something out, that works much better than when we have to wait for another location to administer a test so that we can fill in the blanks.

Streamlining the testing process further has been a goal of ours. In the 2021 legislative session, the Texas legislature passed a law that will affect testing and now we’re just waiting for the rule to be published and put into action. The goal is to reduce the number of times a new driver has to go to the Department of Public Safety in person. Ideally, they would just have to go in once to pay the fee and take their picture, and the rest can be handled online or at a driving school.

Perspectives on the mDL Trust Framework

Two digital identity experts discuss what the mDL trust framework needs in order to work and what the future holds for the technology.