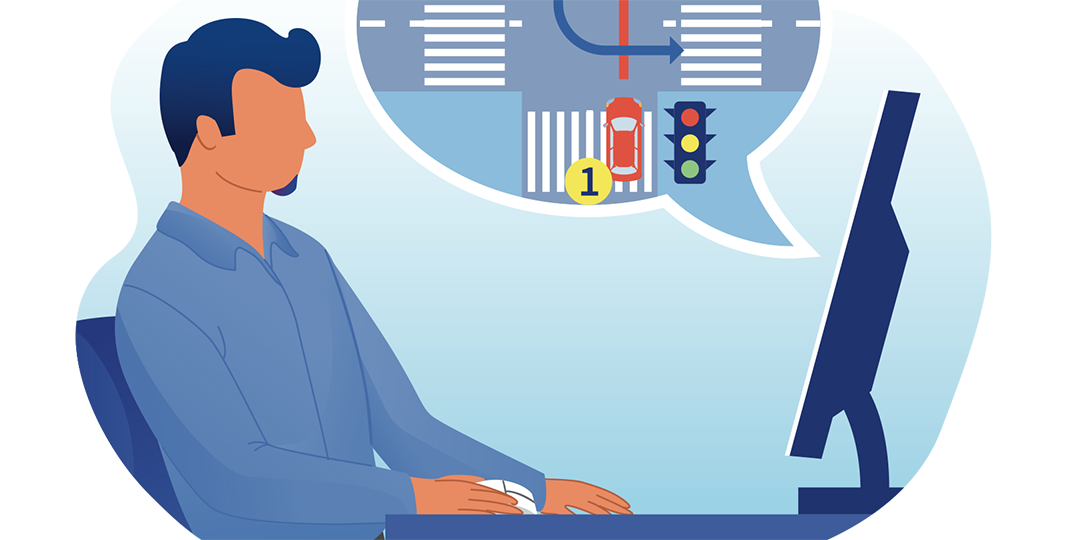 The National Safety Council is America’s leading nonprofit safety advocate—and has been for over 100 years. In 1964, we pioneered the country’s first defensive driving course. Since then, we’ve trained more than 75 million drivers in all 50 states and around the world. These are licensed drivers who are already behind the wheel—they know the basics, but they need defensive driving skills.

We had to make significant changes to our defensive driving course when the COVID-19 pandemic arrived last year. This was no small task, since each of our 22 jurisdiction partner programs have unique requirements about the duration and content of the training. Our goal was to ensure the course remained equally impactful despite the remote environment.

To demonstrate the scale of the challenge, I’ll give the example of Massachusetts, one of our largest programs. We train approximately 150,000 licensed drivers in the state annually. The online training is student-paced with no instructor.

But I do think, as human beings, we like to interact with other people when we’re learning, so we’ll have to figure out the model for the future. In some of our courses, especially for repeat offenders, students get together in a classroom and talk about the challenges they’re having. The learning that happens when people share their stories in person is sometimes hard to replicate virtually.

Early on, we had to pivot from traditional classroom training to virtual instruction, which we had already set up. (Before the pandemic, about 40% of the instruction was online.) I think everyone providing classroom training has had an epiphany during this time: We can actually conduct all training online, even if we couldn’t have imagined it before 2020. In some cases, it will be temporary, but other jurisdictions will consider keeping the online capability available beyond the pandemic since it makes it easier for many to complete trainings and get back on the road safely.

As a safety organization, we provide many recommendations and resources, including an initiative called SAFER, which we launched to help employers and workers navigate the world during the pandemic. It includes guidance for working environments, transitioning to in-person instruction, transportation safety during COVID-19 and mental health.

We’re also concerned about overall road safety. In the first six months of the pandemic, we saw a 20% jump in the fatality rate—and that’s with 17% fewer miles driven. So that means there are many people driving tired, distracted or not wearing seatbelts. It’s very important that employers—including DMVs—keep their employees safe.

Everyone is under so much stress right now. The most important thing is to have some empathy. Understand that your employees are distracted as well and offer them a defensive driving course to boost their skills. At MVAs, for those served or employed, it’s very important to make sure everyone gets home safely.

In Washington state, we regulate commercial driving schools for new drivers, and we’ve always had brick-and-mortar requirements. Online was a concept that we knew was out there, but nothing that we had considered. Moving from in-person to online was a real paradigm shift for us.

COVID-19 first hit here, in Washington. A number of industry leaders came to us and said, “What options do we have?” Our regulations required that in-person training happened at the schools and did not permit online training. So, we quickly educated ourselves about the state’s emergency rule process. We learned that you’re only allowed to implement emergency rules for a certain time period, not indefinitely. We also realized that the online training—both for public schools and commercial schools—had to be live and interactive with students. We actually had to create language in our administrative rule to allow web-based instruction.

Then, on April 29, the American Driver & Traffic Safety Education Association (ADTSEA) facilitated a national conference call. Participants included my counterparts and administrators of safety education in three-quarters of the jurisdictions across the United States. What we learned was that we were all in the same boat with the challenges we were facing. I shared our emergency process and documentation.

Not only did we partner with the industry in creating an emergency rule that would allow online training, we also partnered with other state agencies, including the health and labor departments and the governor’s office. It was great working with teams of smart people on these efforts. While we don’t have oversight of the public schools, we are in regular communication with our peers who are responsible for school oversight. We provided our safety protocols to the Office of the Superintendent of Public Instruction, and they communicated it to their schools. That allowed them to make decisions for their own driver education and be consistent with the commercial schools—which is important for public safety.

Instruction is still primarily online. Some schools began offering in-person training and in-car instruction after additional safety protocols were established. Students need to be six feet apart, so they’d have maybe four students in a classroom instead of 25. The driving started out with one instructor and one student, and then they allowed two students in the car with windows rolled down and vents on. Everyone must wear masks, the instructor must wear gloves, and the car needs to be cleaned between drivers.

In normal times, I log 50,000 to 75,000 miles each year flying. I have not traveled since March [2020], but I don’t believe I’ve ever worked as hard. We are a small consulting company in highway traffic safety and driver’s license test administration.

We’ve faced a number of challenges in driver education alone in the past year. The norm for driver education is 30 hours in the classroom, six hours behind the wheel and, in most jurisdictions, six hours of observation time. Now, of course, it’s a challenge to conduct classroom instruction as well as behind-the-wheel instruction. Some programs are doing all virtual training sessions while some are doing half classroom and half virtually. By far the biggest challenge has been that teachers/instructors had no idea how to conduct live, virtual training (versus traditional classroom) because they were never trained how to do it—but that will change. I see the future as more of a blended approach that includes virtual, e-learning and classroom training. When we’re done, probably 90% of the jurisdictions will allow some form of virtual training, compared to only 39% before the pandemic. Some topics, like those that use videos, can actually be presented better virtually than in the classroom. Cognitive skill development can also be done very effectively in a virtual setting. On the other hand, anything that involves a group conversation or has to do with behavior modification, like fatigue or impairment, may better be done in the traditional classroom because you’re shaping attitudes. In terms of discussing values, it’s much harder to read someone on-camera than it is face-to-face.

We provide management services to the American Driver and Traffic Safety Education Association (ADTSEA), and in the spring, we began offering COVID-19 guidance on their website, such as tips for driver educators. The Association of National Stakeholders in Traffic Safety Education (ANSTSE), of which ADTSEA and AAMVA are members, conducted numerous webinars and developed “Stopgap Measures in Driver Education During a Pandemic or an Emergency,” which provides temporary solutions for behind-the-wheel instruction, testing and assessments, and addresses the need for risk management planning. These are unprecedented times, so sharing information, passing along promising practices and working collectively is critical. This is beyond any one organization. It’s not just about saving lives on our highways anymore, but about saving lives because we’re all susceptible to catching the virus. We’ve learned an important lesson from this—that there’s a need to develop risk management plans. To think something like this won’t happen again is a mistake.

This is a tough time for all those teens who are looking forward to getting their driver’s license. Government responses to COVID-19 across North America have had major and varied impacts on public and private driver education schools. But that doesn’t change the fact that young and new drivers need to successfully pass a road test before they can drive. At many driver licensing offices, road test appointments are suspended indefinitely because safe alternatives are in short supply.

Some jurisdictions have implemented waivers to reduce backlog and maintain a contactless approach. Georgia, for example, allows any 16-year-old with a learner’s permit to get a state driver’s license after passing a modified road test with a parent in the vehicle and the examiner instructing and monitoring from outside of the vehicle. In Wisconsin, the Department of Transportation waived its road test for 16- and 17-year-olds, deferring decision-making to parents. This puts the onus on parents instead of a qualified driving examiner to decide if their teenager is ready to drive.

In both of these cases, the waivers may reduce backlog, but they raise concerns with road safety stakeholders. Research shows that teen drivers have the highest crash risk of any age group of drivers. During their first six months with a license, young drivers are eight times more likely to be involved in a fatal crash than more experienced drivers. They simply haven’t driven or lived long enough to fully develop the skills needed to identify and safely respond to hazards on the road.

Fortunately, most jurisdictions are choosing cautious approaches such as hiring and training more driver examiners, extending the hours of driver licensing offices and increasing the daily number of road tests. Although this alternative to the backlog may take longer to implement, it puts safety first. In the meantime, I’d encourage parents and teens to be patient and use this time for practice drives. Formal driver education is important, but a clear understanding of safe driving comes from hours of driving practice with a parent on all types of roads and under a variety of traffic and weather conditions. Spending time in the car with your teen creates opportunities to talk about good choices and habits as well as reinforce the importance of safety—particularly when it comes to other teen passengers in the car and peer pressure to take risks. Remember to be a good role model and practice the habits you want your teen to adopt.

While buying vehicles online may be convenient, new challenges arise

Despite people traveling less, traffic incidents and fatalities increased in 2020. Experts attempt to understand and cope with this surprising and dangerous trend