Supporting and Promoting Move Over Laws

According to statistics obtained from the Emergency Responder Safety Institute, 2021 was the deadliest year on record for traffic incident responders


The familiar flashing emergency lights ahead warn us about roadway incidents like vehicle crashes, disabled vehicles, law enforcement traffic stops, and other emergencies. Law enforcement, fire, EMS, transportation, and towing professionals use their emergency lights at roadside (or when blocking the road) thousands of times every day across North America in hopes that drivers will slow down and move over.

Unfortunately, not enough drivers are obeying move over laws. According to statistics obtained from the Emergency Responder Safety Institute, 2021 was the deadliest year on record for traffic incident responders. In total, 64 traffic incident responders were struck and killed by vehicles while working roadway incidents.[i]  According to Federal Bureau of Investigation statistics, the trendline for law enforcement officers struck and killed shows a 100% increase over the past decade.[ii] Though injury data is hard to find, many more responders are being struck and injured and even more response vehicles are being hit while parked at roadway incidents.

Move over laws have been enacted in all 50 states, the District of Columbia, Puerto Rico and many Canadian Provinces. These laws universally require drivers to move over one lane on multi-lane roadways and/or slow down when a lane change is not available, when approaching stopped emergency vehicles. Driver training, public information, and better data collection are keys to improving this dangerous situation.

According to a AAA study, 23 percent of drivers were unaware of the move over law in the state where they live.[iii]  The Federal Highway Administration (FHWA) is currently looking at Move Over law compliance and a recent survey of states noted that 45 state driver handbooks mention move over concepts and another 22 specifically quote the state law.[iv]

While many states have some type of move over messaging campaign, it is often left to individual responder agencies to undertake using social media and public service announcements. As a form of education, enforcement is another area where greater emphasis and consistency can help. High visibility enforcement campaigns, coupled with targeted media efforts have proven to be effective tools.

State traffic records systems can provide needed data for understanding the problem. Unfortunately, looking for pedestrian responders who are struck at incident scenes can be challenging using crash systems. New Model Minimum Uniform Crash Criteria (MMUCC) elements that identify “responder involved” (P4.S2) and their discipline have yet to catch on in state reports. Similarly, “pedestrian action prior to crash” (NM2.S1) coding can capture “working in trafficway (incident response)”, but it is only included on 15 state crash forms. While no one wants a bigger crash report, these are examples of additional MMUCC crash reporting elements that law enforcement would likely embrace.

Agencies that have responsibility for licensing, education, and traffic records have a great opportunity to impact the safety of our roadway responders. With every stakeholder contributing, flashing lights ahead will be more than just a familiar sight, but one that prompts awareness and action. 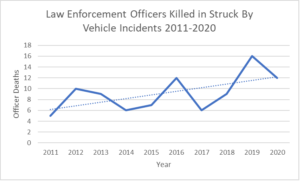