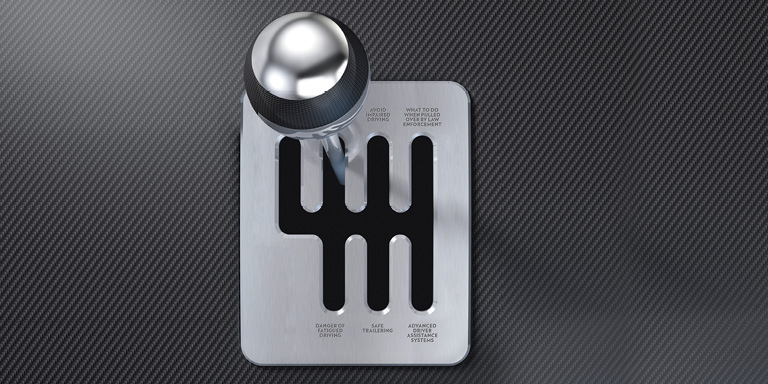 
This is an era of rapid, continual change for drivers, shaped in part by new technology like electronic driver-assist systems, and also by challenges ranging from fatigue and impairment to increased awareness of interactions between motorists and law enforcement.

It’s with that shifting environment in mind that AAMVA recently updated its Model Driver’s License Manual, part of the Noncommercial Model Driver Testing System (NMDTS) that AAMVA produces as a model for jurisdictions to use while preparing their own driver-testing materials.

One of the key additions in the updated NMDTS is a section on Advanced Driver Assistance Systems (ADAS), which is intended to highlight available safety features while underscoring how new drivers shouldn’t become over reliant on such technology. Describing specific features is a challenge because they vary by manufacturer; the manual includes a link to a website, mycardoeswhat.org, where drivers can learn more about the technology in individual vehicles.

The manual reminds drivers that just because they’re in an ADAS-equipped vehicle they should never let their focus or attention drift.

“A big piece now is teaching teens and the general public to remain engaged in the driving task at all times, because it’s easy to become complacent if you think the vehicle is always going to take care of everything,” says Brett Robinson, executive director of the American Driver and Traffic Safety Education Association, who consulted on the NMDTS updates.

Other changes and additions include a section on safe trailering, as well as how the Model Driver’s License Manual discusses fatigue and impairment. Past versions of the manual also cautioned against impaired driving, but Robinson says the legalization of marijuana in many jurisdictions helped drive a reevaluation of that section.

“Just because something is legal doesn’t mean you can operate a motor vehicle under its influence,” Robinson says.

Perhaps the most significant addition is a new section describing how motorists should behave when pulled over by law enforcement. Those stops can be very tense for motorists, especially new drivers, because nobody wants a ticket or a delay. These stops can be even more fraught, thanks to a string of highly publicized incidents.

Those high-profile cases have ratcheted up the tension associated even with routine traffic stops. In response, law enforcement agencies and motor vehicle administrators are working on educational efforts that can help keep traffic stops safe. AAMVA and law enforcement partners have created  a resource for drivers regarding both how they should behave during a traffic stop, and also what they should expect from the law enforcement officers on the other side of the car window.

“If anyone has blue lights behind them, their stress level goes up,” says Spencer Moore, commissioner of the Georgia Department of Driver Services and a member of AAMVA’s International Board of Directors. “If people have some knowledge of what to expect once they’re pulled over—what to do, and how to react—it can help de-stress the situation because, typically, both parties desire a safe outcome, not one that leads to tragedy.”

Many jurisdictions have long included instructions for how to respond in the event of a traffic stop in driver training materials. However, guidance from different sources including law firms, civic groups, insurance companies and other organizations doesn’t always align. That lack of uniformity can lead to uncertainty, confusion and tension during a stop.

“We decided that we needed to create a document that included accurate guidance on what you should do if you’re pulled over by law enforcement, and just as important was to partner with other organizations so that we would have multiple authoritative sources speaking with a single voice,” says Brian Ursino, director of law enforcement at AAMVA.

The white paper outlines the preconditions for a stop (reasonable suspicion of a traffic or criminal violation) along with an acknowledgment that the experience can be stressful for motorists, passengers and law enforcement officials alike. Then 14 bullet points cover both the motorist’s responsibilities and what the motorist should expect from the officer. The list includes items such as turning off audio devices, keeping hands visible and alerting the law enforcement official if there is a weapon in the vehicle.

The white paper aims to help motorists avoid some of the behaviors that can cause alarm among law enforcement officers and perhaps spark an unnecessary escalation.

“The social unrest and the issues connected to that have driven a wedge between law enforcement and our communities, and a number of those incidents have started with traffic stops,” says Daniel Sharp, longtime police chief of Oro Valley, Arizona, and chair of the Highway Safety Committee of the International Association of Chiefs of Police (IACP). “We want the temperature brought down. We want people to understand that there’s an expectation both for the motorist and for the officer.”

The purpose of the white paper isn’t only to capture traffic-stop guidance, but to share it with the motorists who will benefit.

“We want to make this a community outreach tool—something that both our law enforcement and DMV members can use to reach out to the community and say, ‘This is how it should be done. If  you follow these protocols, you’ll make the traffic stop safe for yourself and for the officer,” says Ursino.

That means finding opportunities to share the white paper and its guidance with drivers. AAMVA has created a video that recaps the key points, and it is available as a free resource to jurisdictions across the country. It could also be included within driver training programs, to play in waiting rooms at driver services facilities and also as part of outreach programs to community groups.

Additionally, AAMVA’s Noncommercial Model Driver Testing Systems subcommittee will recommend that state jurisdictions include “What to Do and Expect When Pulled Over by Law Enforcement” in their driver training materials, as part of the next edition of its published best practices.

The promise of widespread distribution is “one reason it’s so important that it’s been endorsed by so many groups that have a national reach,” says IACP’s Sharp. “We want everyone to understand that this has been a collaborative effort.”

By bringing together so many different partners, AAMVA is contributing not only to the white paper’s authority, but also to a broader movement in which law enforcement is endeavoring to foster trust and improve relations with citizens. For Georgia’s Moore, that’s one of the most gratifying aspects of the project.

“The better we understand each other, the less we are apt to react in negative ways. And what I am seeing—certainly here in this state—is law enforcement engaging the community at an unprecedented level, trying to build relationships within the community to educate each other and learn from each other. That’s going to be the key to resolve these issues,” Moore says.

Indeed, the white paper dovetails with a broader IACP trust-building campaign that aims to build trust both among different law enforcement agencies as well as the communities.

By creating this new collaborative white paper and sharing its contents with drivers, AAMVA hopes not only to avoid tragedies, but also to ease the tension of traffic stops, and that the exercise of sharing this information builds trust and repairs a frayed relationship between citizens and law enforcement.

To view the model driver’s license manual, go to: tinyurl.com/yndrbxs6

And to see the “What to do when stopped by law enforcement” white paper and video, visit tinyurl.com/2s3swnc6.