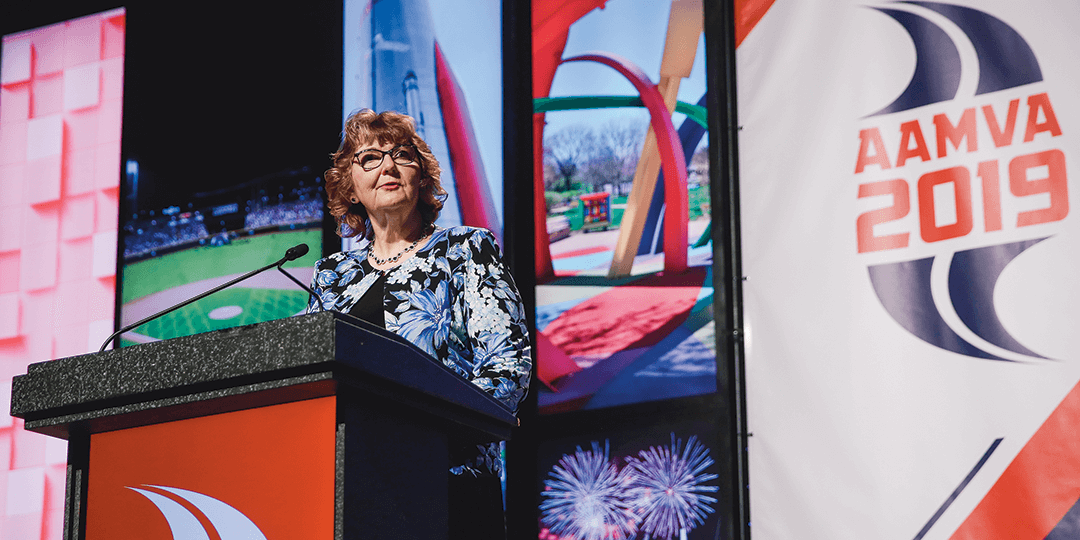 
AAMVA’s 2019 Annual International Conference (AIC), Aug. 20–22, in Omaha, Nebraska, was a huge success. AAMVA’s immediate past Chair of the Board Rhonda Lahm and the Nebraska Department of Motor Vehicles welcomed over 800 attendees to The Big O for three days of engaging sessions and fun events. From bringing humor to the workplace, to sessions on the future of document security and vehicle technology, this year’s AIC provided a wealth of information for attendees to take back home.

Along with learning opportunities, the conference provided the chance to network and consult with peers, with events like the Jurisdiction Roundtables and Town Halls, President’s Reception & Drive for a Better Life Tricycle Race, QuickConnect, and the Administrators Meeting & Jurisdiction Exchange. Throughout the conference, with your help, we raised over $13,880 for Clinic With a Heart. Thank you for all of your generosity and hard work to make this fundraiser successful!

The 2019 AIC also saw the outstanding work of our members recognized at the Awards Luncheon. The conference finally concluded with the Nebraska State Banquet and the swearing in of our new International Board of Directors, including Chair of the Board Whitney Brewster, who invited everyone to Austin, Texas, for the 2020 AIC.

Honoring a Lifetime of Service

Chuck DeWeese, Assistant Commissioner, New York State Department of Motor Vehicles, and Col. Nathaniel McQueen Jr., Superintendent, Delaware State Police, were both honored with the Lifetime Achievement in Highway Safety Award at the 2019 AIC. DeWeese was the recipient of the award in the motor vehicle administration category, and Col. McQueen was the recipient in the law enforcement category.

The award recognizes their commitment to and accomplishments in highway safety over the course of their careers.

DeWeese started his career in highway safety in 1992 as a special agent at the Federal Motor Carrier Safety Administration, where he conducted safety investigations on poor-performing truck and bus carriers and worked with U.S. Department of Transportation legal advisers to remove noncompliant carriers from roadways. He was subsequently promoted to acting division administrator, where he led criminal investigations and spearheaded a multi­agency effort to reduce commercial motor vehicle crashes, leading to his lifelong passion for saving lives on highways.

In 2007, DeWeese was hired as the assistant commissioner of the New York Governor’s Traffic Safety Committee. Since then, he has been the driving force behind the committee’s most nationally recognized and effective traffic safety campaigns and programs including, but not limited to: establishing the state’s Impaired Driving Advisory Council; developing the Distracted Driving Enforcement campaign; and partnering to create the state’s award-winning Pedestrian Safety Action Plan, an ambitious partnership of the New York State Departments of Health and Transportation and the Governor’s Traffic Safety Committee.

In addition, DeWeese chairs New York State’s Traffic Records Coordinating Council; serves as a Governors Highway Safety Association (GHSA) regional representative; and is Chair of the Federal Relations Committee, which is the conduit between the National Highway Traffic Safety Administration and GHSA.

In 2014, he led a critical review of the agency’s accountability process with the goal of being more effective and efficient in reducing crime and traffic collisions. Utilizing A Police Organizational Model For Crime Reduction as a guide, he used a combination of intelligence-led policing and accountability to improve operations. This process led to the state-wide implementation of a stratified policing model known as the Delaware State Police Enhanced Analytical Response (SPEAR). Between 2015 and 2017, those practices and procedures became anchored in the DSP culture, making it the first U.S. state police agency to successfully adopt this model. Since its inception, SPEAR has had a positive influence on highway safety in Delaware.
According to Col. McQueen’s article in the September 2018 edition of Police Chief Magazine, projections are tracking toward a 15-year low in motorcycle and pedestrian related crashes, with a decrease in fatal crashes as well. Proactive DUI arrests and drug investigations for patrol officers have also been positively impacted. This year’s investigations are projected to be the highest in over 15 years, directly contributing to a decline in impaired fatal crashes. Before SPEAR implementation, alcohol and/or drugs were involved in over 50% of the fatal crashes. In 2017 and 2018, impairment rates have declined to 45% and 41%, respectively.

Col. McQueen works regularly with the Delaware Office of Highway Safety, Division of Motor Vehicles, and the Department of Transportation to address emerging challenges with roadway, vehicle and license legislation. At the Colonel’s direction, DSP organized the Interstate 95 challenge, which coordinates all 15 states along the east coast that police I-95 to address speeding and aggressive driving, and to reduce traffic collisions. DSP participates in the Drive to Save Lives campaign, where each troop area provides added resources to hot spots for enhanced highway safety, and Col. McQueen encouraged all in-state agencies to participate in hot-spot areas within their jurisdictions. In 2018, Col. McQueen brought Below 100 training to DSP, with the goal of improving trooper safety on the roadways.