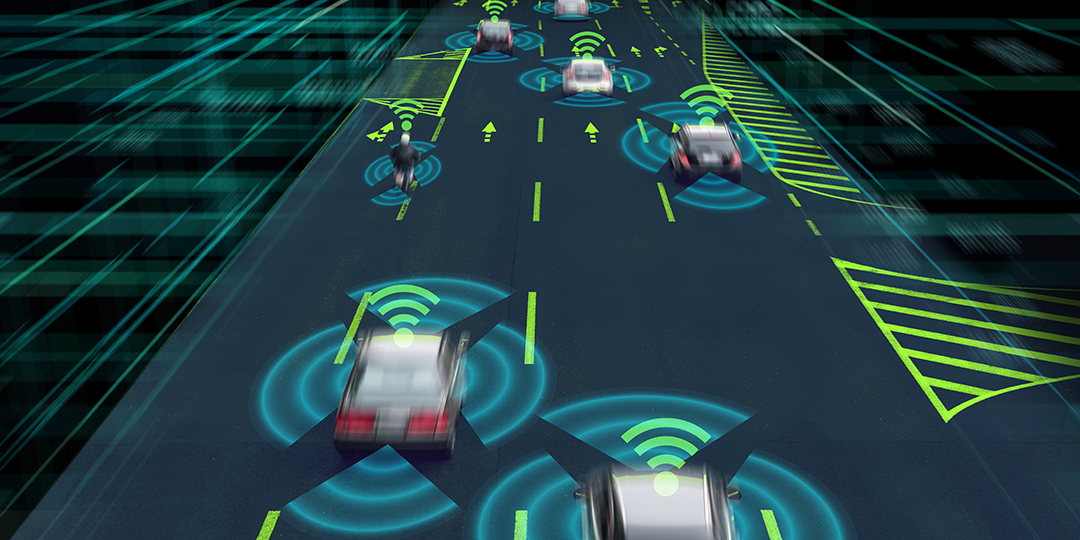 
Over the past several years, automakers have incorporated more advanced driver assistance systems (ADAS) into their vehicles. These features started as luxury amenities but are now commonplace in vehicles at just about every price level.

For example, backup cameras were in about half of U.S. model year 2012 cars. Now, they are required in all new automobiles as of May 2018 under the terms of a rule announced by the National Highway Traffic Safety Administration. This was the result of Congress passing a law in 2008 requiring the Department of Transportation to construct rules and regulations mandating backup cameras. Similarly, the Standing Senate Committee on Transport and Communications in Canada released a detailed report including 16 recommendations for the Canadian government to best prepare for these new vehicle technologies.

In 2015, a test conducted by the American Automobile Association (AAA) showed that 75% of drivers were reluctant to use parallel parking assist systems, believing—as a separate AAA driver survey reported—that their own parking skills were more reliable. However, the test showed that the system performed better than unassisted drivers in key facets of the maneuver.

Another study undertaken by the AAA Foundation along with the University of Iowa a few years later showed more acceptance of ADAS tech, but also a lack of understanding of how to best use the features. For example, only 21% of drivers with blind-spot monitoring (BSM) realized that the feature could not detect vehicles traveling at very high speeds in the approach area.

Perhaps even more worrisome is the change in attitudes and behavior that shows an over-reliance on the technology by some drivers. The study reported that a quarter of owners of cars with rear cross-traffic alert admitted to sometimes backing up without turning around to check behind them, and 30% with BSM sometimes changed lanes without checking the area first. As the study authors summed up, “Many respondents demonstrated lack of awareness of the key limitations of the technologies.”

The question for motor vehicle administrators is now: are motorists equipped to leverage the potential safety benefits of these systems?

One of the first tasks in making drivers and examiners familiar with ADAS is to establish the “universe” of available systems. This is actually more difficult than it would seem because manufacturers use slightly different or proprietary names for similar functions, says Karen Morton, AAMVA program director for Driver Licensing. The following is a list of passive warning systems, active driver-assist systems and convenience technologies from the guidance document. It includes recommendations regarding which features should be allowed during driver testing. 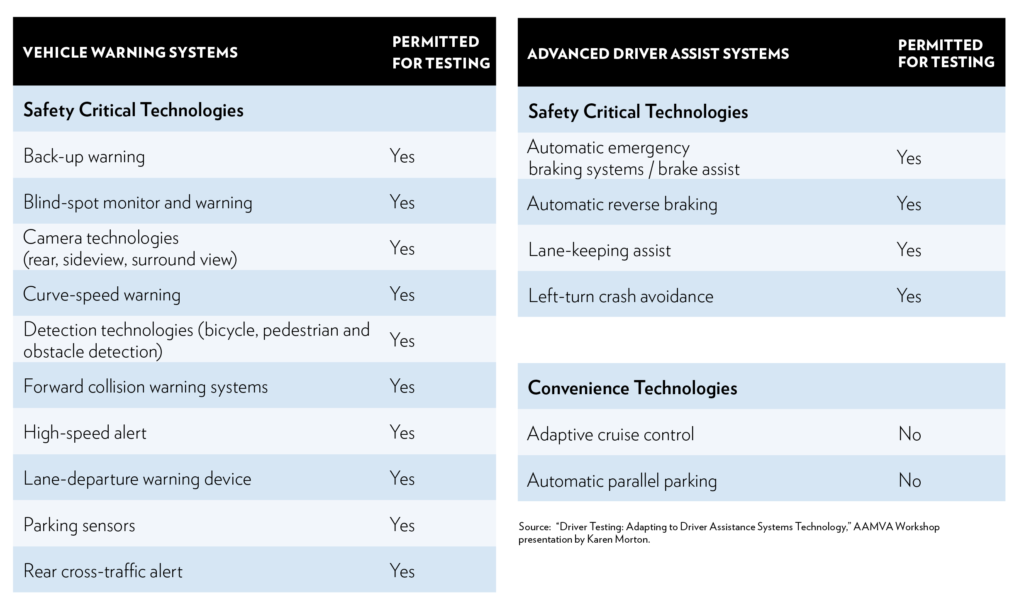 GUIDANCE ON THE WAY

One way to answer this question is through driver examination and licensing. In response to queries from jurisdictions, an AAMVA working group developed guidance for driver licensing agencies regarding ADAS and their implications for roadway safety. Karen Morton, AAMVA program director for driver licensing, says that a critical first step is distinguishing systems that are driver conveniences, such as automatic parallel parking or auto-cruise control, from those that are designed to enhance safety, like lane-keeping assist, obstacle detection and blind-spot monitor and warning.

“We have to adjust how we test drivers,” Morton says. “We are trying to evaluate the behavior of the driver, not that of the vehicle.” She offers the example of a driver taking a road test on a highway who gets a blind-spot warning, which might be a vibration or a visual signal. The examiner must watch to see if the driver proceeds into the lane despite the warning.

“The driver is supposed to be making safe decisions,” Morton says. “The scoring is going to be similar to what’s been established historically on each parameter. Even if the vehicle has the technology, the driver still has to scan the environment and react accordingly.”

MEANWHILE, IN THE FIELD

In years past, before such technology was commonplace, some examiners asked test-takers to cover up or disable ADAS. That is not the practice now.

“All safety tech should be able to be used during testing,” remarks Larry Boivin, chief driver license examiner, Maine Bureau of Motor Vehicles and Chair of AAMVA’s Test Maintenance Subcommittee (TMS). His goal is to make field staff aware of what ADAS can do and to be more open-minded about them. “Just because something is beeping, [that] doesn’t necessarily mean the driver is doing anything wrong,” he says. “There have been times when the applicant actually has a chance to tell me about some feature I didn’t even know about.”

Boivin says that the driver has to be familiar with everything featured on his or her vehicle, though. “About a year and a half ago, we were testing a young man in his early 20s who had been discharged from the Marines. He was using a vehicle he was unfamiliar with, and we were going through how to apply and release the emergency brake. He was unaware that there was an electronic release,” continues Boivin. “He became so befuddled he couldn’t continue with the exam. I would have given him a clue if it had been the old-style release, but I wasn’t sure how it worked, either.”

Bob Rowland, CDL motor carrier coordinator, Massachusetts Registry of Vehicles, echoes Boivin’s requirement that drivers of trucks and commercial vans know how to use the ADAS that are integrated into their vehicles. “AAA did research and found that there were 40 different names for the same technology. It becomes confusing for the general public. For us, when a driver comes in to test, if they can explain what the feature does, that’s okay.”

Rowland says that these new technologies may not be as common on trucks in Massachusetts at the moment, as compared with other parts of the country. “I haven’t seen these a lot here, but there are trucks that have transferred in from California and Nevada that don’t have mirrors; rather, they have cameras instead. So, we see if the driver has determined that the cameras are functional and screens are clean.”

“This is a really interesting time,” Boivin says, as all drivers have to adjust to motorways that have a mix of old-style, enhanced and eventually fully autonomous vehicles. “We want to embrace the technology, but we must be careful. There are fundamental skills that every driver must possess. In the meantime, we will have a certain level of apprehension, and that’s good.”