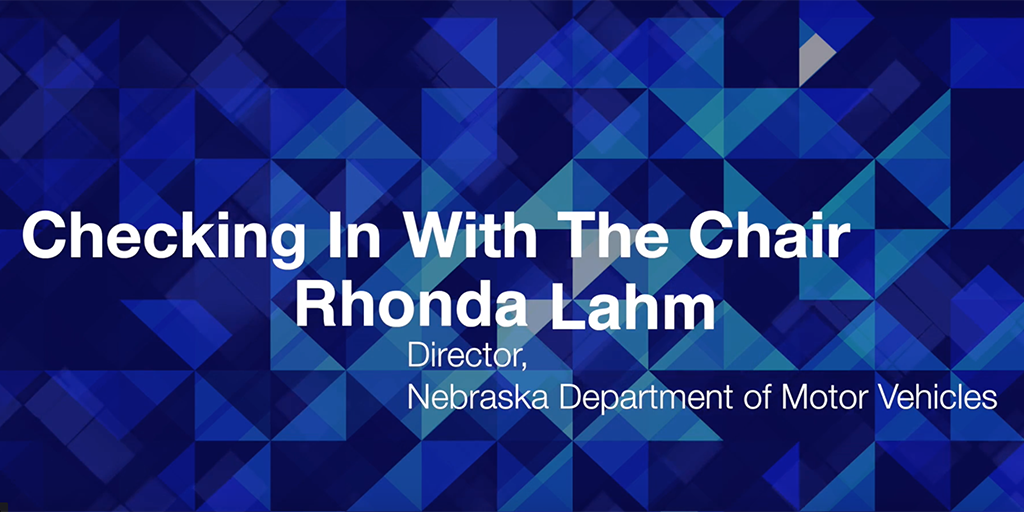 Checking In With The Chair


Chair of the AAMVA Board of Directors, Rhonda Lahm, has gotten her tenure off to a busy start. After officially taking the position on at the 2018 Annual International Conference in Philadelphia, she has had several months full of meetings and conferences, travelling all across North America. We caught up with her while she was in Arlington, Virginia at the Combined Standing Committees Meeting, to ask about how she got involved in the AAMVA Community and what she hopes to accomplish as Chair.

Rhonda Lahm has been Director of the Nebraska Department of Motor Vehicles for the last five years. Prior to her current role, she served 25 years with the Nebraska State Patrol, retiring as a Major, and then served as a driver examiner. It was during her time with the Nebraska State Patrol that she first was exposed to AAMVA. “I attended a Workshop in Corpus Christi, Texas,” says Lahm. “And then when I was appointed to my current position as Director [of the Nebraska DMV] my predecessor gave me some very wise advice. She was involved in AAMVA on the regional level and on the International Board, and she said, ‘You really need to get involved with AAMVA. It’s a great organization, very helpful to be a part of it.’”

Lahm took that advice, and first got involved with AAMVA at the regional level, eventually becoming President of AAMVA Region 3 before coming to the International Board of Directors. She says her predecessors have been very helpful with advice and encouragement. “The folks who have preceded me as Chair are all really talented individuals,” she says. “More than just giving me tips or tricks or tools of the trade, I think they also spoke by their actions. I got to watch all of them as they were Chairs of the Board and the things that they did, what made them successful, what helped the organization – I think that’s the best learning experience.”

“Mainly it’s – enjoy the year, learn all you can, visit the regions, learn about the regions, and I think, position the organization to continue to be successful. I think that’s the biggest thing – I learned from watching them do the job.”

Lahm says she plans to lead the association in focusing on data security and privacy during the upcoming year. “As a community charged with the protection of people’s data – literally every person in North America – data privacy is becoming a big issue, and there have been some significant events in private industry in recent months that have brought that to the forefront.” To help the AAMVA community in strengthening data security, the AAMVA Board has approved two new working groups that will be working on the issue in the coming year. “I think that’s going to be a real priority for the Board and for us as an organization,” she says. “360 risk management within the association – showing off better the work we do to protect people’s privacy.”

Another focus of her year as Chair will be helping members attract and maintain a vibrant workforce. “I think an issue we all struggle with is retention and recruitment and keeping our quality people. All of us have a ton of great people working for us, and being able to get good employees and keep good employees is a real challenge.”

Lahm says she is most looking forward to learning a lot in the coming year. “I’m anxious to learn about the different divisions, what makes them unique, what challenges are they facing. I’m anxious to learn how I can facilitate the Board supporting the awesome staff at AAMVA. We have a ton of terrific people who support us every day and help us do our jobs and serve our people. I’m looking at how I can support the organization and provide guidance to the Board to keep the Board moving forward, and taking away things that will make me a better director and make our agency better back home.”

Though she has plenty to keep her busy both in Nebraska and on the road as Chair, Lahm enjoys many different activities during her free time. “When my schedule permits, I like to hop in the car and drive down I-35 to Texas because that’s where my two granddaughters are – ages 2 and 5. Being 900 miles away, I don’t get to see them as often as I’d like,” she says. “I also like scrapbooking, that’s the thing I do to give me ‘me’ time. My perfect Saturday is scrapbooking all day and watching college football.” She says she also enjoys baking and is looking forward to the holiday season when she can show off her talents. “I’ve been known to use my employees as guinea pigs when I try new recipes – so far they haven’t complained,” she jokes.

Checking in with the Chair