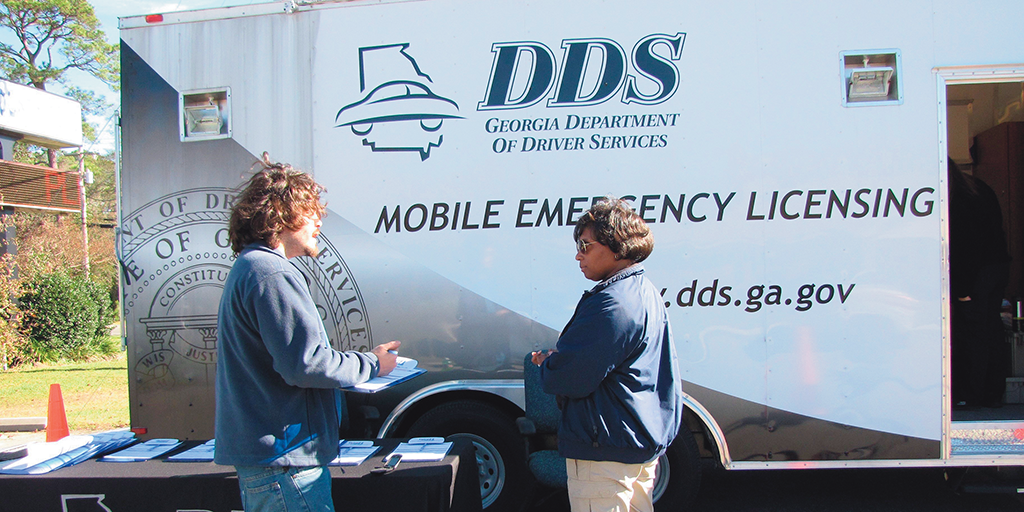 ID of the Storm


On his way to oversee the Georgia Department of Driver Services’ (DDS) first emergency deployment of its mobile emergency licensing unit after an historic tornado outbreak in January 2017, DDS Commissioner Spencer R. Moore remembers feeling as if he was driving through a warzone.

“You saw mangled trees everywhere; metal siding from houses detached and sitting on trees, cars that were overturned,” he says. “It was complete destruction.”

The tornado outbreak, which occurred between Jan. 21 and 23 last year, brought 81 separate tornadoes sweeping across the southeastern United States, including 42 confirmed tornadoes and 14 deaths in Georgia alone. After the tornadoes subsided, employees from DDS visited the affected areas with the department’s new mobile emergency licensing unit, which allowed them to help victims of the tornadoes whose lives had been uprooted.

“One of the things we did, shortly after the event, our team here huddled together to quickly figure out how we can help,” says Commissioner Moore. “If you lose your house, every part of your life is now missing. A number of people’s houses were completely annihilated, nothing existed in the home.”

Moore explains that due to Georgia’s Secure ID process, they were able to offer more than just new IDs to people who had nothing.

“[When you initially get your license,] if you presented a birth certificate or social security card, or some other form of documentation that shows your address, like a water bill or electric bill, we have that info stored,” he says. “We were able to respond not just by giving credentials, but also in some cases providing materials or documents that people can use to establish other things in their life.”

For any of those documents that a Georgia citizen had previously provided to DDS, the mobile emergency licensing unit was able to pull up a digital version and print out a copy that the citizen could keep. These could be used for proof of address or even for account numbers that may have been lost in the storm. Not only did this provide people in need with information and identification, but it also helped their peace of mind, giving them something to hang on to after so much of their property had been destroyed.

For Commissioner Moore and his team, being able to provide that kind of personal customer service is just as important as the new technology represented in the mobile emergency licensing unit.

“Certainly the technology is valuable, but at the end of the day you have to have people who want to volunteer to go to the places that people are trying to get away from and perform a service for people in need. We have some of the most dedicated employees I’ve seen in 25 years of state service. None of this can occur without the wonderful staff that makes it all work.”